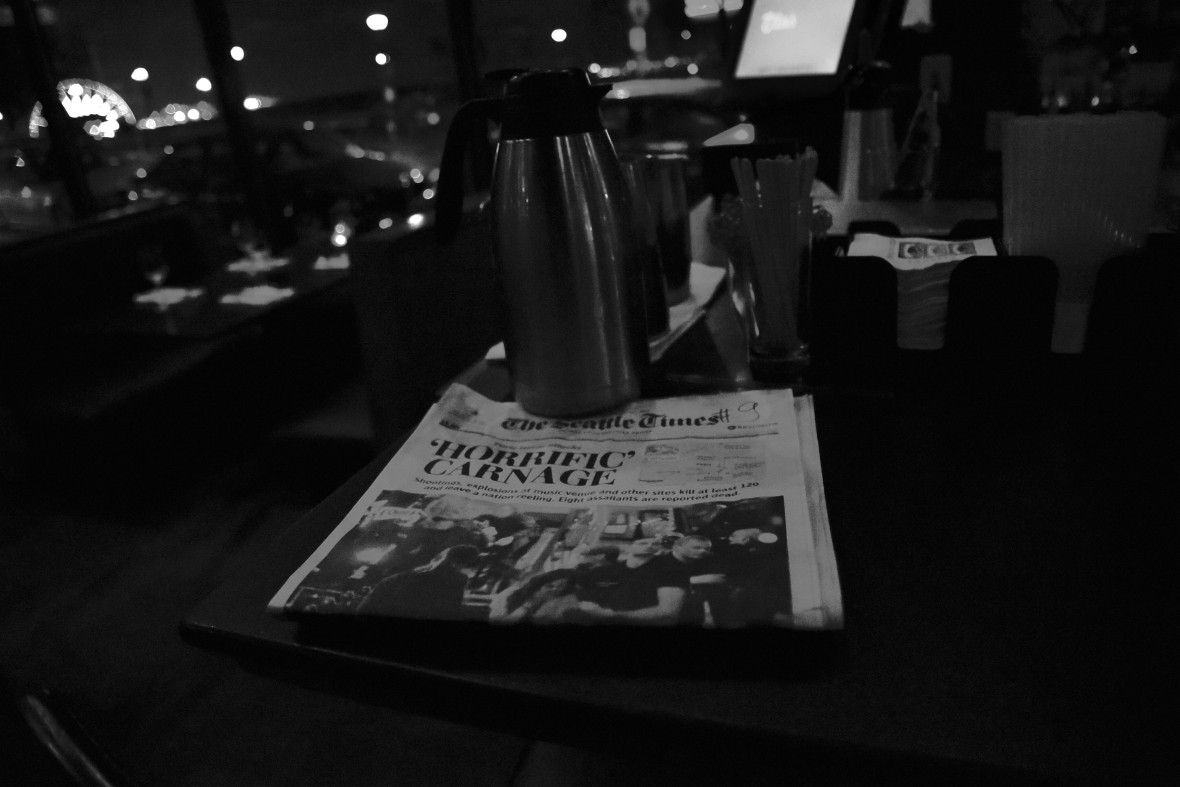 This morning I met with a girl from Seattle (by way of Georgia, the country, not the state) for a project I’m working on. She sat at my table, and within seconds said: “So, let’s address the elephant in the room: it’s terrible what happened but, hey, people die every day, especially in my country, so let’s not dwell on that”.

She is right. But I was a bit taken aback, I guess it was a bit too fresh to just dismiss like that.

Her comment also brought to mind the whole backlash that the support for Paris has garnered because western civilisation didn’t show the same support for Beyrouth (and Facebook didn’t use their safety check feature) after the attacks there two days prior. I don’t know that my thoughts on this are nuanced enough to express an opinion without having my three readers get crazy about this but… Look, I get it, it totally feels like the world only cares about certain deaths and I’m sure some horrible people do only care about white deaths, and it’s awful buuuut… Paris is different. 1) As horrible as it is to point out, that region is more unstable and attacks there are more common than they are in Paris (and I realize how fucking lucky I am to have been born there). Because Parisians are lucky enough to live in a city where such awful events do not normally happen, the shock is that much greater. 2) I can only speak for myself but as a French person who’s never lived in the Middle East, my Facebook feeds reflects that, and it was no surprise to see the support posts flooding it. I’m sure for locals, their feeds also reflect what happens there. Now if you have no connexions to the events… Which brings me full circle to: 3) Paris is different. France is different. I don’t support all the actions our government undertakes, I hate that some of my countrymen took vehemently to the streets to fight against gay marriage or vote in way too huge numbers for my taste for Marine Le Pen… but Paris, City of Lights, and France, country of human rights, are symbols. I felt nauseous reading Daesh’s press release, in which they congratulate themselves for killing these infidels who live a lifestyle they disagree with. The people killed could’ve been any of my friends or me, because what these fuckers hate are the values we stand for, the sins we represent: women’s rights, gay rights, public drunkenness, lewd behavior, laughing too loud… And I personally think these are progressive values that are worth fighting for, in whatever part of the world you live in. Who cares where they come from? I care about where they’re respected, and in Paris, there are more than in certain parts of the world.